A hilarious conversation between Don Jazzy and Wizkid is causing a frenzy on social media as Wizkid sparked the conversation with a question directed at the ace producer, Don Jazzy.

Wizkid asked the producer how he came about the hit song, Booty Call and with a hilarious response, Don Jazzy gave a narrative of how the song was put together by him, D’Banj and Wande Coal. 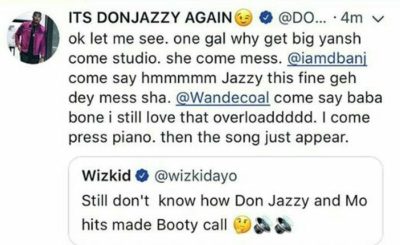 MOST READ:  Davido caught at a night club drinking from syringe